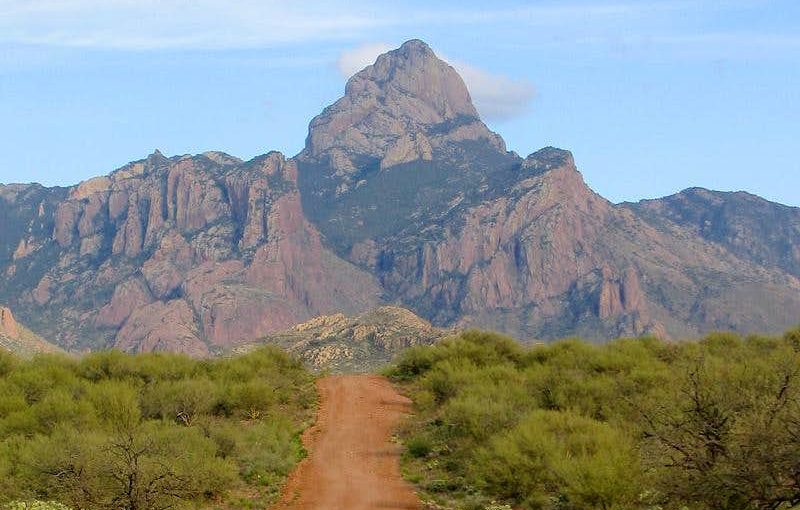 I guess it is only human nature to dwell on now faded, but warm and fuzzy memories of rock climbing, instead of focusing entirely on all of our wonderful winter activities revolving around our famous “white smoke” here in Jackson Hole. Such thoughts should be banned since we are currently in one of the best winters for backcountry skiing that we have seen in several years (the winter of 03-04). Thoughts of warm rock and sunny days, as well as snow free hiking and birding for something other than chickadees and goldeneye ducks, are strong incentives to look southward. I have made variations of this trip before, and will undoubtedly do it many more times in the future. In summary, I blast out of Jackson on a good day; hoping for a minimal distance of nasty roads, and pleasant drive to Zion National Park. Zion offers an attractive campground and there are a number of trails or climbing routes that can be used as therapy to overcome the effects of the previous day in the car.

The next dash southward is towards Arizona’s Sonoran Desert with its promises of warmth and sunshine. Depending on the total time of the planned trip I can find places along the way to waste minutes, hours, or days; but my real goal is Tucson and beyond. Tucson’s Mt. Lemmon has always drawn me in for at least several days of climbing. However, last year’s fire there may have caused some problems and I will have to investigate. Mt Lemmon is an area near Tucson offering many, many climbs, both traditional and sport, on a good granitic rock. Expect to spend some time being lost at first, as there are a bewildering number of separate crags crowded together on steep slopes. When climbing there, opportunities abound to visit with other local climbers, since I am forever asking others about where I am versus where I think I am. It is usually a very humbling interaction, but I manage to make it worthwhile by getting updates on the popular Mexican eateries and such local tidbits. One thing about these pleasantries which constantly amazes me: when asked the “what and where” of my trip I always mentioned Cochise Stronghold and Baboquivari Peak and am surprised by the universality of their response, which is essentially “Oh, I have always wanted to go to those places.” Hell, they live in Arizona and I have to come a thousand miles and will continue to do so.

Baboquivari Peak is about 60 miles SW of Tucson. Although I am not one to wax poetic about spirituality, I can understand why the Tohono O’odham Indians hold the mountain to be sacred. Even without a climbing motive, I find the surrounding countryside beckoning. Although the mountain offers a number of Grade VI climbs on its east face, I find a couple of routes more compelling (and they certainly are more in my ability range): They are the classic 5.6 SE Arête and the 5.8 Don’s Crack. They are 7 and 10 pitches long, respectively, and should be considered adventure climbing as opposed to sport climbing. Don’s Crack hosts a lovely poison ivy plant, which can be bypassed via a delicate stem; but because the rope will go through the bush, people who are very sensitive to this plant should consider not doing this route or making sure they are adequately protected when handling the rope afterwards. If not, you may have intimate knowledge about where you put your fingers that day. Such lessons seldom come cheaply. Nonetheless, it really is a great climb and well worth doing. These climbs can be approached on either side. The east side has a road that may require a more rugged vehicle, but one can get much of the altitude out of the way with a car. The rest of the approach is relatively non-trailed and one risks bleeding to death by cactus. The west side has a trail that starts in a rather dirty and ill-maintained campground, but it has the advantage of being a quick trail to the base of the mountain. Also, in spite of the trash, it has good birding habitat. I don’t think that I have ever gone anywhere up on the mountain without getting a little bit disoriented, not knowing exactly where I want to go, and having to poke around for a good route or the right direction.

Cochise Stronghold is in the Dragoon Mountains and consists of two areas the East Stronghold and the West Stronghold. The areas are flanked by the towns of Willcox and Tombstone, AZ. The west area is much wilder that the east side, but more routes seem to exist on the east side and the approaches certainly seem tamer there also. Innocent climbers need to beware of the Arizona boys (and perhaps girls) who climbed there first. They set high standards and must have climbed in a very confident manner, considering the dearth of protection on some of their climbs. Both short climbs and multi-pitched ones abound, although I prefer the longer multi-pitched climbs as they seem more in character with the place and its history. Another warning should be entered, one pertaining to birds. The authorities close seasonally the area around Rockfellow Dome and the area around What’s My Line because of nesting falcons in the spring.

On the approaches there, I entertain myself with trying to find some of the many examples of Indian art and, of course being a bird nerd, I am always stopping and whipping out my binos to look for unknown birds. This proclivity of mine really tests my partner’s patience, but the quality of the climbs seems to be worth it to them to put up with my idiosyncratic behaviors. Back to climbing: A list of climbs that I enjoy or climbs that I think I would enjoy would include the all time great What’s My Line(5.6, A0), The Wasteland (5.8), Beeline(5.9R), and Abracadaver (5.11)(this is the one that I think I would enjoy assuming that I can get past the 5.9 off-width which might well be the crux of the 5/11 climb). The rock where Abracadaver is, Rockfellow Dome, has a number of other climbs which look very nice. On the west side Moby Dick (5.8) and Warpaint (5.10c) are both outstanding routes. As I said before, this side is more remote, primitive, and the approaches can be adventures in themselves.

This short list really doesn’t do justice to Arizona climbing. Sedona and Oak Creek have quite a lot of climbing. If anyone is looking for an exciting climb, consider the original route on the Mace, near Sedona. It was done in 1957 by TM Herbert, Rearick, and Bob Kamps. While you are clambering over the poor quality rock, just imagine doing so with lesser shoes and without any of those huge cams! And if the bolt at the top crux falls out, as it did when we bypassed it, just stuff it back in its hole for the next party. And, of course, it is obligatory to try to get your partner to jump back down over the gap on the decent as was done on the first ascent, especially if you can get him to do it and you can avoid doing it yourself. Beware jumping the gap wearing tight climbing shoes. I have been told that it really hurts. And I can’t believe that he really did jump. Just looking at it scared me, and the thought of ….. Yikes!

May I digress here for a moment for a moral consideration? When I was clutching the afore-mentioned bolt, I was possessed by a need to possess that bolt. It had, if I remember correctly, a hanger made from an early Lost Arrow (?) and had T.M.’s initials stamped on it. Oh, how I wanted it for my collection. But reflecting on how much fun it was to happen upon it, I thought I had best leave it where it was – a living climbers’ museum where future climbers could happen upon it, feel the same joy and fear, and reflect how it was in the “old days” I only hope that the future climbers concur and act in a similar manner.

Below I listed a few of the area climbing guide books that might be of interest to climbers.

If more time, money, and energy still exists, consider a less direct trip back through back through Joshua Tree and Red Rocks at Las Vegas to experience a couple of other great climbing areas. Then, of course, the way back might include the Virgin Gorge, Snow Canyon; oh, the list seems endless. This might be the time to check out a climber’s traveling bible: “Rock N Road” just to make sure you do not accidentally go past a good climbing experience. This could turn into the ENDLESS CLIMBING ROAD TRIP!

If your interests include things other than climbing, such as hiking and/or birding; a little effort and research will reward you with many great areas for these activities. The American birding community views this general area of Arizona as one of the great birding areas because of the many Mexican species not seen elsewhere in the U.S. Now, just where did I leave my skis, shovel, and avalanche beacon? Even if I wasted the last of the winter powder, I still will have the corn.