Bouldering is a game of pure climbing skill –a test, so to speak, of a climber’s physical ability to climb difficult rock. One should simulate actual climbing conditions by making the most of the climbs listed in good form, i.e. without lunges or irreversible dynamic moves. The boulders are big boulders, big enough to cause their own weather and to hide some of the early signs of changing weather. Very severe storms can come up quickly. Be equipped for them – keep the car close. Boulders and boulder routes can be made as difficult as one wants merely by eliminating hand or footholds. If you feel a route is too easy, then do it with a banana or beer in one hand or even with no hands! GEOLOGY Once upon a time glaciers covered Jackson’s Hole, then once again the glaciers retreated leaving remnants which through a process of weathering come to be what is now the present shape of the boulders. They are composed of stone. EQUIPMENT FOR BOULDERING Klettershue work nicely on most routes. Platform boots will make some of the no-hands routes easier. R.R.’s,R.D.’s, P.A.’s and E.B.’s seem to dominate the scene at the boulders, but other footwear, or the lack of it has from time to time made its appearance in the area. A block of magnesium carbonate helps eliminate the greasy spots on the handholds. 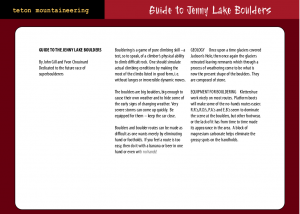